This paper describes the general design and execution aspects of a peripheral retaining wall to the construction of the underground floors of “Hotel Montaigne” building, located in Cannes, France. Considering the geological and geotechnical constraints, the presence of high water table and the surrounding conditions near existing buildings, it was performed a retaining wall of soil-cement panels executed using the deep soil mixing technology, in particular the Cutter Soil Mixing (CSM) technology. The soil-cement panels were reinforced with vertical steel piles and temporarily supported by two levels of steel pipe struts. Besides allowing a safe vertical excavation and limiting the water inflow to the interior of the excavation, the retaining structure was designed as a secondary foundation element of the final structure together with a concrete wall executed against the CSM wall and the principal foundation elements constituted by micropiles. The main results of modelling and quality control of the work are also presented.

This paper refers to the retaining structure executed to the refurbishment of the building “Hotel Montaigne”, located in the city of Cannes, France. The existing hotel was remodelled and expanded, with the construction of an additional high floor in the existing building and a new building block with seven floors high and three underground floors (Figure 1). The retaining wall was designed to allow the excavation of the underground floors of the new building block.

The excavation site plan, with a trapezoidal geometry, presents an area of about 300 m2 and is bounded by streets and existing buildings (Figure 2).

The main challenge of this project consisted in the execution of an urban excavation with an average depth of 9 m under demanding ground and water table conditions. The main concerns in the design of the retaining wall were the guarantee of minimum interference in the surrounding area, assuring the security during and after the works and, simultaneously, the reduction of the water inflow to the interior of the excavation. In this context was defined a retaining wall formed by soil-cement panels executed using the Cutter Soil Mixing (CSM) technology. The CSM wall was reinforced by vertical steel piles and horizontally supported by two levels of horizontal struts.

CSM was developed from Deep Soil Mixing (DSM) and is based on the mechanical mixing of the existing soil with cement slurry to form soil-cement panels in depth with a rectangular cross-section (Fiorotto et al., 2005; Gerressen et al., 2009). The execution of CSM panels doesn’t require the removal of the soil unlike other techniques, for example, concrete pile walls or diaphragm walls. There is no soil decompression during the execution of CSM panels which allows the minimization of the interference with the surrounding area. The continuous wall formed by CSM panels was reinforced with vertical steel piles to satisfy simultaneously the following main objectives:

The soil characterization was based in two geotechnical studies, performed in different phases.

In an initial phase, with a restricted access to the work site, a preliminary study was carried out, including the installation of a piezometer to the measure of the water table, the execution of a drill boring test and the execution of a Ménard Pressiometer Test (PMT).

In another phase a second geotechnical study was carried out to complement the initial study. This second study included the installation of a piezometer, the execution of two drill boring tests, two PMT tests and laboratory tests in intact samples, particularly Triaxial tests.

The laboratory tests were carried out to identify the type of soils in depth and its geomechanical characteristics. Through the analysis of the in-situ and laboratory test results, three distinct layers were identified (Figure 3):

The water table was detected approximately 3.5 m below the surface.

The excavation is bounded on the north by a street (Rue Montaigne), on the south by a building with three floors high, on the west by the building of the existing hotel with three underground floors and seven floors high and to the east by a small building to demolish before the start of the excavation.

The work is located in the city of Cannes, France, and the seismic risk was classified with the Standard Norms of the country. According the Decree “nº 2010-1255” of 22th October 2010, in the French territory are distinguished with five zones with different degrees of seismic intensity (Figure 5): very low (1), low (2), moderate (3), medium (4) and high (5).

The city of Cannes is located in a zone of moderate seismic intensity. According to the same Decree, four Categories of Importance to the buildings are defined, by an increasing order of importance: Categories I, II, III and IV. The new building block of the “Hotel Montaigne” is inserted in the Category of Importance II (collective housing building with a height up to 28 m).

The continuous CSM wall was executed by overlapping primary and secondary soil-cement panels, with a rectangular cross-section with dimensions of 2.40 m x 0.55 m, considering a minimum overlapping between adjacent panels of 0.20 m to assure an effective connection throughout the height of the panels.

The reduction of the water inflow to the interior of the excavation was one of the main concerns during the conception of the retaining structure and, with this aim, was defined to the CSM panels a minimum penetration length of 3 m below the bottom of the excavation, into the sandstone substrate (ZG3).

The CSM panels were reinforced by vertical steel piles (IPE 450 piles), installed at 1.10 m intervals (two piles in each panel). The placement of the steel piles in CSM panels allows the protection of these elements against buckling problems and minimizing possible corrosion problems.

The solution included also a 0.15 m thick concrete wall, executed from the bottom of the excavation, against the CSM wall.

The retaining wall was designed to support, together with the concrete wall and the micropiles performed as the principal foundation elements, the total vertical efforts transmitted from the permanent structure of the building.

During the cutting phase, the soil matrix is broken up and cement soil is blended to fluidify the soil. The penetration rate of the cutting head and the cement slurry volume added to the soil must be adjusted by the rig operator to create homogeneous soil-cement panels. Depending on the characteristics of the existing soil, during this phase may be necessary the use of bentonite instead of the cement slurry. When the design depth is reached, the extraction of the cutting head begins and the rotation direction of the cutting wheels is inverted. During this phase, the remaining quantity of cement slurry is added to homogenize the mixture. In Figure 7 is presented the CSM execution process.

Cutting phase: The mixing tool is driven into the ground and the soil matrix is broken up by the cutting wheels and at the same time a fluid (grout) is injected to fluidify the soil.

Extraction and mixing phase: After reaching the design depth, the extraction begins and the remaining volume of grout is blended into the soil.

The analysis of the retaining wall was carried out using a numerical model developed with the finite element program PLAXIS®. The soil was simulated using the Hardening-Soil model with the geomechanical parameters already presented in section 2.1. The retaining structure was simulated with a one-dimensional linear beam element. The numerical analysis was carried out in plane strain. The representative sections of the four elevations of the retaining structure were studied. Figure 8 presents an example of one of the analysed sections (Section A), representing a cross-section of the north alignment, near a street (Rue Montaigne).

Figure 8 - Section A: cross-section (on the left) and analysis model representing the deformation at the maximum excavation depth (on the right)

In the following table are presented the maximum values of the horizontal displacements of the retaining structure obtained in the numerical analysis of the Section A.

The execution process started with the execution of the CSM panels before the excavation (Figure 9).

Figure 9 – Components of the equipment: cutter head and kelly bar

To the reinforcement of the CSM panels, vertical steel piles were installed immediately after its execution as close as possible to the excavation face to allow the connection of the steel beams and the steel pipe struts (Figures 10 e 11).

The next stage consisted in a small excavation to allow the execution of the concrete beam at the top of the retaining wall. After the construction of the concrete beam, an excavation to a maximum depth of 0.5 m below to the first level of struts was carried out. At this stage were executed the steel waler beams to the connection of the horizontal steel pipe struts. The second level of excavation and the execution of the second level of struts were carried out by a similar process to that described to the first level.

After reaching the maximum depth of excavation, a concrete wall is constructed against the CSM wall. The temporary levels of struts are deactivated with the execution of the concrete slabs of the building structure.

The application of CSM technology allows the control, in real time, of the execution parameters by the rig operator through the monitor of the equipment (Larsson, 2005).

The variability of strength and deformability parameters of the soil-cement obtained using CSM technology is directly related to the degree of homogeneity of the mixture that is influenced by a lot of variables as the type of the existing soil, the water table presence, the distribution of the cement slurry in the desegregated soil, the chemical reactions during the process, among others. There are a lot of variables that can influence the quality of the final result obtained and, because of that, the effective control of the execution parameters is essential. During the execution of a CSM panel, the rig operator control and adjusts, in real time, the execution parameters as the speed of the mixing tool, the cement slurry volume added, the cement slurry pressure in hoses, the inclination of the mixing tool, among others (Figure 13). 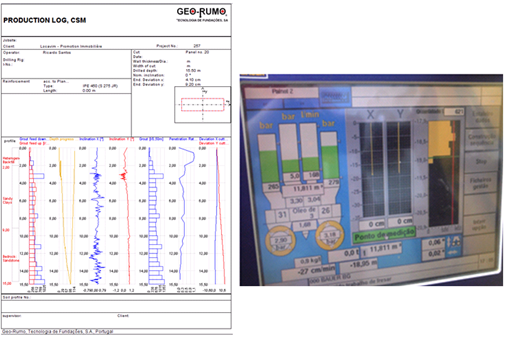 The samples tested after 7 days presented a value of unconfined compressive strength of 5 MPa (average value), a higher value than the required value of 4 MPa. This allows the validation of the design hypotheses.

CSM technology has a wide-ranging application field and it can be applied to all soil types. As it was referred in the paper, the quality and the homogeneity of the soil-cement panels depends on several factors that affect the execution process and, because of that, the control and monitoring of the work is essential, especially in urban excavations.

Regarding the experience of the company in the application of this technology, it has been successfully applied in Portugal and France in different types of works, especially the execution of retaining structures and the improvement of foundation soil.