This paper presents the most relevant design and execution aspects of a retaining wall for the construction of the underground floors of “Villa Paradisio" residential building, at Cannes, France. The geology of the site is characterized by the presence of a clayey fill overlying a fractured dolomites substrate for the analysed depths. Taking into account the existing constraints, mainly the geological and geotechnical conditions and the urban area conditions, the adopted solution was a retaining wall executed by soil-cement panels, through the application of deep soil mixing technology, particularly the Cutter Soil Mixing (CSM) technology. The retaining wall was reinforced with vertical steel piles and temporarily supported by one level of horizontal steel pipe struts. The particularities of this work are the maximum depth of excavation, which is about 12 m, with a single level of struts, in addition to the geotechnical characteristics of the formations overlying the bedrock and the location of the water level, nearby halfway up the excavation. The main aspects of the execution process, the numerical modelling and the quality control of the work are also presented in this paper.

In this paper is presented the case of the peripheral retaining structure to the excavation of the underground floors of the residential building “Villa Paradisio”, at Cannes, France. The building is developed in four underground floors for car parking and seven floors high to the distribution of the 81 residential apartments (Figure 1). The excavation site presents in plan an area of about 840 m2 with a maximum excavation depth of 12 m.

Figure 1 – Representation of an external view of the building (www.cannes-paradisio.fr)

In urban excavations, one of the main constraints during the execution process is the minimization of interferences in the neighbouring structures.

The building is located in a densely built-up area and is bounded by streets and neighbouring buildings. Additionally, an old concrete pipeline is located near of the northern alignment of the work and its integrity must be assured during the excavation. This urban excavation presents a maximum depth of 12 m, in the presence of water nearby halfway up the excavation, but the presence of the dolomitic bedrock detected above the bottom of the excavation constituted a good support of the bottom of the retaining wall, allowing to design of a safe solution with only one level of horizontal steel pipe struts.

The retaining wall consisted of a continuous CSM wall formed by soil-cement panels with only one level of struts. This solution, besides allowing the vertical excavation, was conceived with a second objective of limitation of the water inflow to the interior of the excavation.

In a first phase, the geological and geotechnical characterization of the ground was carried out by an initial study including the execution of a borehole and laboratory tests on intact samples from the work site. In this first study the objective was the evaluation of the nature of the soils. It was identified a clayey fill superficial layer resting over a dolomitic rock fractured at the top and successively less fractured in depth.

To specify the interfaces of the layers, the water table conditions and the geomechanical characteristics of the soils, it was performed a second study including the installation of three piezometers, the execution of three Ménard Pressiometer Tests (PMT) and laboratory tests in intact samples.

Figure 3 – Main geotechnical parameters and cross-section of the excavation

As it was presented in Figure 3, the interpretation of the results obtained allows the definition of the following geotechnical zones:

The water table was detected approximately 6 m below the surface.

In the design and execution of the retaining wall one of the main concerns was the minimization of the impact in the surrounding area. In the following figure are presented the two neighbouring buildings of the excavation.

Figure 4 – Neighbouring buildings of the excavation

As shown in Figure 5, a concrete old pipeline is located near of the northern alignment of the work and its integrity must be assured during the excavation.

Figure 5 – Location of the concrete pipeline

The performed solution to the retaining wall was a continuous wall, formed by soil-cement panels with a rectangular cross-section, executed through the CSM technology. The CSM panels were executed with a minimum length of 15 m to assure a minimum penetration of 3 m below the bottom of the excavation, into the bedrock. The CSM retaining wall, 0.55 m thick, was reinforced by vertical steel piles (IPE 450 piles) placed at 1.10 m intervals as additional resistance to the bending moments resulting from the earth pressure, the hydrostatic pressure and the overloads on the surface. At the top of the retaining wall was executed a concrete beam to connect the vertical steel piles. To the 12 m depth of excavation was defined only one level of steel pipe struts (Figures 6 and 7) connected to steel waler beams.

The continuous CSM wall was formed by overlapping primary and secondary panels, with an overlap length of 0.20 m to assure an effective connection of the panels in depth.

It was performed a concrete wall, 0.15 m thick, executed after each level of excavation, against the CSM wall.

Figure 7 – Cross-section of the retaining wall

In the following figure is presented a partial view of the retaining wall with the steel waler beams, the internal struts and the concrete wall.

Figure 8 – Partial view of the retaining wall with the steel waler beams, the internal struts and the concrete wall

The application of CSM technology allows the use of the existing soil as a construction material, resulting a little generation of spoil, which constitutes an environmental advantage when compared to traditional technologies as concrete pile walls or diaphragm walls.

The possibility of controlling the execution parameters in real time is another advantage of CSM technology. The process of mixture of the cement slurry in the disaggregated soil by the cutting wheels may be influenced by a lot of variables and, to obtain the required characteristics of the CSM panels and a reproducibility in its execution, is essentially the control of execution parameters as the speed of the mixing tool, the pumped volume in depth, the inclination of the mixing tool, among others (Bringiotti et al., 2009).

The rectangular geometry of the CSM panels is advantageous when compared to the circular column sections, the most significant of which are the cost, the reduction of the number joints in the wall, the need of significantly lower volume of treatment to obtain the same effect and the freedom to use different types of reinforcements (Fiorotto et al., 2005).

A numerical analysis was carried out in the design phase using the finite element program PLAXIS®. The ground was modelled in depth with the geomechanical parameters presented in section 2.1., with the Mohr-Coulomb model. 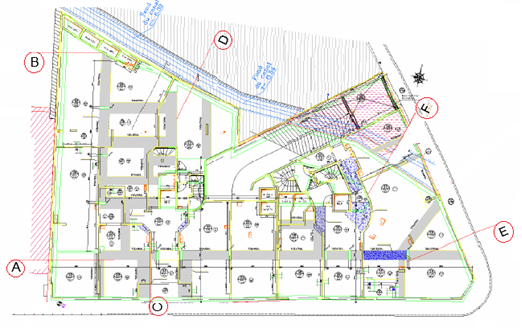 The results obtained from the numerical analyses were lower than the acceptable values defined. The real displacements recorded during the excavation through the instrumentation implemented (surveying targets and inclinometers defined in a monitoring plan of the work) were slightly lower than the expected values.

Before the execution of the panels of the CSM retaining wall, a panel test was executed to obtain samples to laboratory tests (unconfined compressive strength tests) and to the calibration of the equipment.

The quality control of the soil-cement panels was carried out by laboratory tests (unconfined compressive strength tests) on samples from the panels of the retaining wall to the validation of the design parameters of strength and deformability.

The succeeding phase consisted of the execution of a small excavation to the execution of the concrete beam in the top of the retaining wall to connect the vertical steel piles. The subsequent level of excavation was carried out to a maximum depth of 0.5 m below the level of struts with the succeeding installation of the steel pipe struts (Figure 12).

The solution included a 0.15 m thick concrete wall, executed against the CSM wall during the progress of the excavation (Figure 13).

Figure 13 – Execution of the concrete wall

The final phase was the excavation to the maximum depth. In Figure 14 are presented different views of the work and a detail of a pipe strut.

The following figure shows the cutting head used for the CSM panels execution and an example of a rocky block collected during the excavation that represents the type of materials overtaken by the equipment.

Figure 16 – Cutting head used to the execution of the CSM panels (on the left) and example of a rocky block collected during the excavation (on the right).

The application of Cutter Soil Mixing technology on the retaining wall to the urban excavation presented in this paper allowed a satisfactory performance with only a level of steel pipe struts for horizontal support.

As it was pointed out in the paper, CSM technology allows the execution of rectangular shaped soil-cement panels with some advantages when compared to the circular shaped soil-cement columns obtained with the traditional Deep Soil Mixing method. Some of these advantages are the need of significantly lower volume of treatment to obtain the same effect and the possibility to optimize the distribution of the vertical steel piles of the reinforcement. The possibility of the control of the execution parameters in real time is a very important advantage of CSM technology to obtain the required characteristics of the soil-cement panels and a reproducibility in its execution.

The CSM technology has been applied with a satisfactory performance in different kinds of works, mainly to the execution of retaining structures in urban areas as well as in the improvement of foundation soil and constitutes an interesting innovative solution with great potential to develop.