This paper presents the most relevant design and execution aspects of a peripheral retaining structure for the construction of “Parking Saint Nicolas”, an underground parking lot located in Cannes, France. The retaining wall of the construction of the four underground floors was executed through soil-cement panels by the application of deep soil mixing technology, particularly the Cutter Soil Mixing (CSM) technology, reinforced with vertical steel piles. Taking into account the constraints related to the urban surroundings, including the proximity of buildings and streets, were implemented two levels of reinforced concrete slab bands at the levels of floors “0” and “-2”, creating a rigid support system of the four elevations. The slab bands were incorporated on the final structure of the building and with this solution was dispensed the execution of ground-anchors with big lengths that would lead to the occupation of the neighbour underground. This solution brought some economic benefits, especially due to the incorporation of elements used in the final structure at the preliminary stage of the work. The main objectives of the retaining wall solution were allowing the vertical excavation assuring simultaneously the stability of nearby structures and infrastructures, and also reduce the inflow of water into the interior of the excavation during the construction phase. The main results of modelling, instrumentation, monitoring and quality control of the work are also presented.

This paper is intended to present the case of the retaining structure for the excavation of "Parking Saint Nicolas", an underground parking lot in Cannes, France. For the construction of this underground parking, with a capacity for 420 cars, developed in four underground floors, was carried out an excavation to a maximum depth of 14 m. The excavation plan presents a rectangular geometry with dimensions of about 48 m x 55 m and is bounded by existing buildings and streets (Figure 1).

To the excavation of the underground parking was performed a retaining structure formed by soil-cement panels executed through the Cutter Soil Mixing (CSM) technology, with a rectangular cross-section and a geometry similar to the panels of diaphragm walls. The retaining wall was horizontally supported by two levels of reinforced concrete slab bands, executed along the perimeter of the work, creating a rigid support system of the four elevations. Temporary foundation micropiles were executed to, together with the retaining structure, allow the vertical support of the slab bands.

Figure 1 – Location of the work

During the conception of the solution and the execution of the work, one of the main concerns was assuring the minimization of the impact in the surrounding area.

In Figure 2 are represented two views of the exterior of the underground parking.

CSM was developed from Deep Soil Mixing (DSM) technology and is based on the mixture of the in-situ soil with cement-slurry to create continuous walls formed by soil-cement panels of improved characteristics of strength and deformability, executed by a hydromill.

The CSM panels are produced by the mechanical action of the cutting wheels (Figure 3), rotating around a horizontal axis, by desegregating the soil and mixing it with the cement slurry added simultaneously. (Fiorotto et al., 2005).

The results of the in-situ tests together with the laboratory analysis allowed the identification of a heterogeneous geological context of the ground in the work site. The local soil is composed of a sandy clay layer detected from the surface to variable depths between 5 and 10 meters, overlying the substratum of marls. Table 1 presents the main geotechnical parameters, obtained by the interpretation of the in-situ and laboratory tests.

The work is located in an urban zone and it is bounded by neighbouring streets and buildings. To ensure the minimization of the impact in the surrounding area, a rigorous accompaniment of the movements of the retaining structure throughout the different phases of the work is essential.

The retaining wall performed to the excavation of the underground parking lot consists of a continuous CSM retaining wall, reinforced by vertical steel piles (IPE piles) along the panels in depth.

Each panel of the retaining wall was reinforced by two vertical steel piles (IPE 450), installed at 1.1 m intervals. The CSM mixing tool used, allows the execution of soil-cement panels with a rectangular cross-section, with dimensions of 2.4 m x 0.6 m. The continuous wall was obtained by overlapping primary and secondary panels, with a minimum overlap length of 0.2 m to assure an efficient connection between panels in depth (Figure 4).

At the top of the retaining wall a concrete beam was executed to connect all steel soldier piles.

The horizontal support of the CSM wall was performed by two levels of concrete slab bands, creating a rigid support system of the four elevations that were afterwards incorporated in the structure of the building. The two slab bands were executed at the “0” and “-2” floors. The horizontal support in small slab holes was guaranteed by small steel struts. The temporary support of the slab bands was performed by foundation micropiles (N80 ф177,8 x 10 mm – API5A) with a Gewi bar (ф50 mm) in the interior.

The solution included a 0.2 m thick concrete wall, executed against the CSM wall during the progress of the excavation.

In the case of this excavation with the presented dimensions, an alternative solution using steel pipe struts would require the use of large diameter and big length steel struts and, due to the surrounding conditions, the execution of ground anchors wouldn’t be viable. The use of slab bands to a horizontal support of the CSM retaining structure was considered technical and economical advantageous, presenting as the main advantage the incorporation of elements used in the final structure at the preliminary stage of the work.

Figure 5 presents a partial view of the work with the slab bands and the temporary foundation micropiles and a cross-section of the retaining wall structure.

Figure 6 presents a plan view of the general configuration of the retaining wall structure. The peripheral CSM wall was composed of a total of 95 CSM panels. For the temporary support of the slab bands were executed 28 foundation micropiles.

The performance of the retaining wall was evaluated using the finite element program PLAXIS®. Through the referred program, all the phases of the execution process were modelled to obtain numerical simulations as close as possible to the real situations. The ground was modelled using the Hardening Soil model with the geomechanical parameters presented in section 2.1. The analysis included the determination of the maximum values of the efforts and displacements of the retaining wall.

Figure 7 – Section A: cross-section (on the left) and analysis model representing the deformation at the maximum excavation depth (on the right)

Figure 8 – Section B: cross-section (on the left) and analysis model representing the deformation at the maximum excavation depth (on the right)

Table 2 presents the maximum horizontal displacements of the retaining structure obtained in the numerical analyses of sections A and B.

The results obtained in the numerical analyses of all studied sections are in the range of values considered acceptable to the characteristics of this excavation.

Regarding the results obtained to Section B it should be pointed out that the retaining wall is bounded in this alignment by a building with three underground floors. Until the excavation reaches the corresponding depth of the bottom slab of the neighbouring building, practically no efforts and displacements were introduced in the retaining structure. For deep excavation phases were obtained horizontal displacements and efforts in the retaining wall with low values, due to the small depth of excavation below the foundations of the neighbouring building.

The design of the reinforcements to the slab bands to its correct performance during the temporary phase was based on the maximum efforts obtained in the numerical simulations.

The execution principle of the CSM technology consists in the desegregation and mixture of the existing soil with cement slurry, to obtain rectangular soil-cement panels with strength and deformability values defined in the design phase (Arnold et al. 2011).

After the initial phase of the equipment calibration, the panels of the retaining wall were executed. Immediately after the execution of each panel and before the hardening of soil-cement, were installed two vertical steel piles (IPE 450) in each soil-cement panel. In this stage were also installed the inclinometers behind the retaining wall to the control of the horizontal movements. The succeeding phase consisted in the execution of the foundation micropiles to the temporary support of the slab bands (Figure 9).

The solution included the execution of a concrete beam in the top of the retaining wall, connecting all vertical steel piles.

In this phase, the first level of slab bands was executed at the level of stage “0”. To monitor the movements, surveying targets were installed in the slab bands at this stage.

The subsequent phase consisted in the excavation to a maximum depth of 0.5 m below the second level of slab bands. Figure 10 presents two views of the work during this phase. 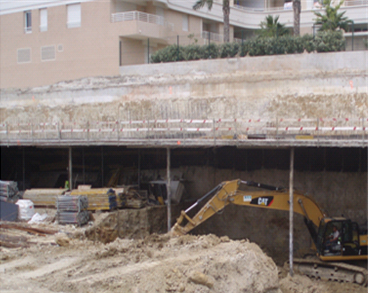 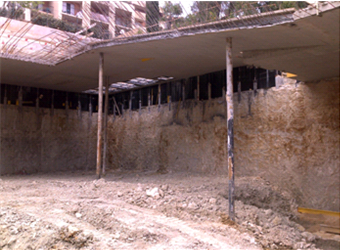 After the execution of the second level of the slab bands at the level of stage “-2”, was carried out the excavation to the maximum depth. The CSM panels were executed to a depth that allowed the minimization of the water inflow to the interior of the excavation, to make more efficient the excavation process. 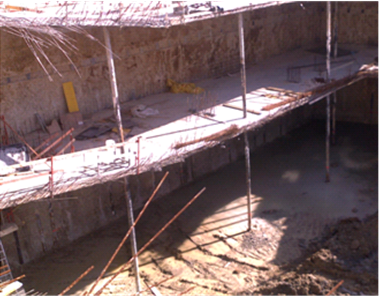 Once the maximum depth of excavation is reached, the bottom concrete slab and the internal structure of the underground parking were executed and the temporary foundation micropiles were deactivated. Figure 15 presents the general aspect in the final phase of the work.

Figure 15 – General aspect in the final phase of the work

The quality control of the work was carried out at different levels. In an initial phase, during the execution of the CSM panels, was performed the control, in real time, of the execution parameters by the rig operator. A second level of control was carried out by laboratory tests (unconfined compressive strength tests) on samples from a CSM test panel and from the panels of the CSM retaining wall. During the excavation, the control of the work was performed by the implementation of a monitoring plan, including the installation of surveying targets and inclinometers. The temporary foundation elements were also subject to control through the execution of Load Tests.

The results obtained in the unconfined compressive strength tests on samples from the panels of the CSM retaining wall are presented in Table 3.

The compressive strength of the samples tested after 14 days are higher than the required design strength (4 MPa) in every performed series of tests. 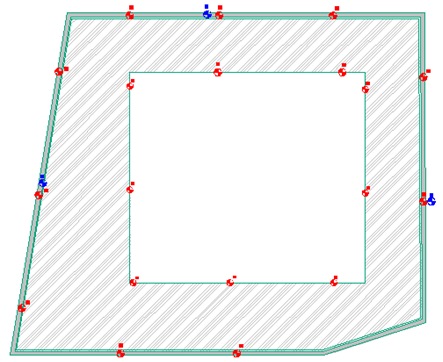 It should be pointed out the importance of the control and monitoring of the work as an essential tool to the reduction of the risk to the work site and to the surrounding constructions, especially in urban excavations, allowing in advance the prevention of problems in the execution process.

The paper has pointed out the good performance of the application of the Cutter Soil Mixing technology to the execution of the retaining wall to allow the excavation of "Parking Saint Nicolas”, an underground parking lot located in Cannes, France. The main objectives of the work were achieved. The CSM wall allowed the execution of a vertical excavation with a maximum depth of 14 m and the reduction of the water inflow to the interior of the excavation.

The horizontal support of the retaining structure using concrete slab bands was one of the most significant advantages of the presented solution, allowing the integration of elements of the final structure at a preliminary stage of the work to avoid the temporary elements of horizontal support as grouting anchors or steel struts. The use of slab bands as horizontal supports of the retaining structure has some advantages when compared with ground anchors because of the non-occupation of the neighbouring ground and the elimination of problems related to its execution below the water table (problems of internal erosion). The presented work constitutes a good example of a technical, economical and environmentally interesting solution.